I wasn’t prepared to read this novel initially but later I found that there’s a manhwa so I was hooked onto the manhwa. Curious to find the ending, I binged read the Google translate and Chinese raw. Although it’s 241 chapters but these chapters are rather short. What’s more the last 20 chapters are about General Song’s love affair.

There are many sad and heart breaking scenes but the ending was a happy and sweet one. Personally I’ll rate this novel 3/5. 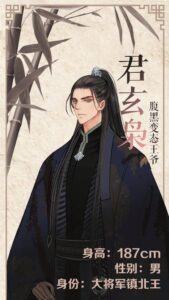 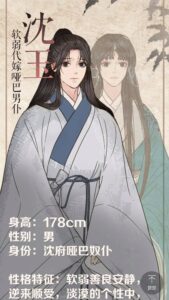 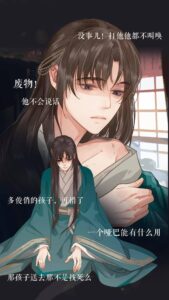 Shen Yu (MC) is a stunningly beautiful slave, unfortunately he is mute and was hidden by his mother in a shed in the mansion of Magistrate Shen. Later in the novel, it is found out that Shen Yu is a descendant of a rich and powerful Chu family. And the reason he became mute at a tender age of 3 was due to an event when his family was attacked by bandits scarring him.

The King of Zhenbei (ML), Jun Xuan Xiao is very powerful general in the north territory, assisting the Emperor of DaJing in fighting the Huns (Xiong Nu) in the north. He wins every battles, is very ruthless and has a harem of concubines. His main wife is the younger sister of the Emperor.

JXX wanted to marry the renowned No. 1 Beauty, Shen Yu, daughter of magistrate Shen. But Shen Yu was terrified since she heard that the king is a ruthless man and many concubines died under him. So the Shen family sent a mute slave to impersonate Shen Yu and married him off to the King. Thereafter, the mute slave took on the name of Shen Yu, whilst the real Shen Yu changed her name to Shen Ruo Fei who later married to the Emperor as a concubine. 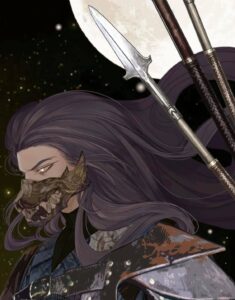 The King was stunned by the great beauty of the mute slave, Shen Yu. But on their wedding night, the King knew that his bride was a male. He didn’t mind since he’s bisexual.

Subsequently, Shen Yu was tortured and framed by the King’s wife and abused by the King himself. Although the king loved Shen Yu and doted him, he was ultra possessive and tortured him if he didn’t adhere to his rules.

Shen Yu was also tortured and poisoned by the king’s wife and his health deteriorated. Shen Yu wanted to ask for help, wanted to explain things to the king but he was mute and was illiterate, thus caused many misunderstandings.

An incident planned by the Emperor and the king’s wife resulted in Shen Yu falling into a ravine and was found by the Emperor. They spent the night in a cave and the Emperor was smitten by Shen Yu. He couldn’t help and kissed him. The next morning, the King of Zhenbei saw both of them coming out from the cave and got super jealous. Thereafter, Shen Yu lost favour and their relationship was a downward spiral. 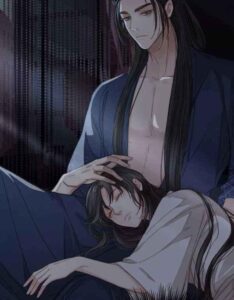 By now, Shen Yu had already deeply fallen in love with the King, but the king ignored him and even took in another male concubine (Hong Lian, who later became General Song’s partner). It was heart breaking when Shen Yu saw shadows and moans of them having sex.

Shen Yu worked as a slave in the household and eventually told the king he’s leaving the household to look for his mother. But he learnt that his mother was taken away by someone…

Shen Yu was later kidnapped by the King’s vicious wife who hired a few burly men to rape him, only to be raped by the men instead, thanks to Hong Lian. Haha.. how ironical and good riddance of that evil King’s wife! The King’s new male concubine, Hong Lian saved Shen Yu and the latter took refuge from the Emperor. 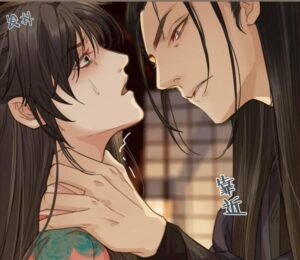 The Emperor was jealous that the King had such a beautiful concubine Shen Yu and wanted Shen Yu for himself. Yet, the King wanted to divorce his vicious sister. As a result, their relationship soured and the Emperor planned to remove power from the King. This led to a rebellion by the King who was later captured and was imprisoned by the Emperor. Shen Yu met the King in prison and asked for the whereabouts of his mother but the king refused to say and instead raped Shen Yu in prison. That day, the King managed to escape from prison and eventually succeeded in overthrowing the Emperor and became the new Emperor of DaJing. 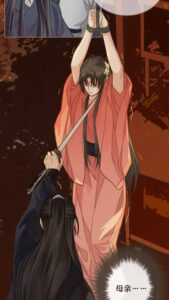 Shen Yu went to find his mother but he was a step too late when his mom was killed during the chaos. He fainted and was looked after by the new Emperor, Jun Xuan Xiao.

The death of his mother devastated Shen Yu that he no longer felt the love for Jun Xuan Xiao. There was a lot of angst between the couple and now JXX wanted Shen Yu to stay by his side. Shen Yu only wanted to be free and he hated and feared to be with JXX.

An incident caused the King to give “poison” to Shen Yu. The king was devastated when Shen Yu downed the poison. It was not a real death because their doctor friend, Bian Shi Si gave Shen Yu a pill to pretend to be dead, unknown to the couple.

JXX finally realised his mistakes and that Shen Yu was the only thing he cared about in this world. But he’s gone. The doctor friend revived Shen Yu who started to talk a little. After awakening from his false death, Shen Yu started a new episode of life.

Subsequently, Shen Yu left JXX to look for his Chu Family. JXX wanted to be near Shen Yu but was afraid to be rejected by him. Thus he followed Shen Yu as his bodyguard masquerading his face with a ghost mask to hide his identity. He also pretended to be mute.

Now we have a role reversal! Shen Yu talks a lot whilst JXX is now a mute!!!! They spent time in the Chu family and Shen Yu was attracted to his mute bodyguard. Somehow a part of JXX in his memory was sealed off after his awakening from his “false death”. 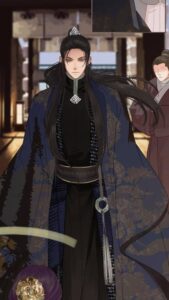 After almost falling off the horse and saved by JXX, Shen Yu finally remembered his ex-husband. He suspected and was almost sure his masked bodyguard was JXX.

An unexpected attack by the Huns on the Chus which sent the couple to run for their lives finally reconciled them. That day, Shen Yu was about to marry his cousin Chu Ling to carry on his family line. But the Xiong Nu /Huns attacked and JXX came to his rescue. JXX promised to assist the Chu with his ZhenBei army if Chu Ling exchanged it with the mpreg pills.

Thereafter JXX was injured severely and finally took off his mask and revealed to Shen Yu his identity. He tied Shen Yu on the horseback and told him to ride to the north to get assistance from his army and General Song Qing.

Eventually the Huns were subdued and the Chu family was saved and the couple had an ultra sweet happy ending. Too sweet, I was almost going to have diabetes!

There is even mpreg in this novel whereby Shen Yu got pregnant.

I just felt the change in JXX’s character towards the end is unrealistically sweet and cheeky, it’s so unlike his initial character. But things change and people change through major life-changing events. Even Shen Yu became very talkative and bubbly, confident and intelligent and enjoyed reading ministers’ reports. Personally I don’t prefer bl MCs have feminine traits or sissy-like. When reading this novel, I always imagined Shen Yu as a girl, then that would have defeated the purpose of reading a boy-boy BL novel. That’s one of the reasons i gave this novel  3/5.

The last 20 chapters are mostly about the affairs of General Song Qing and his lover Hong Lian, who was also the Ex-concubine of JXX. Hiaz…. I can’t imagine the awkwardness when both couples meet one another… wouldn’t Shen Yu say this to Song Qing “I saw my husband slept with your wife many times before”? Or wouldn’t JXX tell Song Qing.. “Hey friend, I had sex with your “wife” many times and am very familiar with his naked body?”

*Disclaimer*: these pictures don’t belong to me and were taken from the *free* chapters of Kuai Kan Man Hwa mobile app.