天官赐福
Author: 墨香铜臭
244 chapters + 4 extras
Ratings: 5/5
Heavenly Official’s Blessing was the second bl or dan mei novel I’ve read after 魔道祖师 Mo Dao Zu Shi (Grandmaster of Demonic Cultivation). Having read quite a handful of bl novels, this book remains a personal favourite of mine. There is a lot of originality and novelty in the plots of this novel and even with so many characters – human, gods and demons, the author skilfully brought out these characters to be unforgettable and endearing. There is always something good even for the antagonists like the green ghost Qi Rong or the heavenly emperor, Jun Wu. *spoiler!!!*
This novel is the author, Mo Xiang Tong Xiu’s (墨香铜臭)3rd Book – the 1st being “The Scum Villain’s Self Saving System”; the 2nd is “Grandmaster of Demonic Cultivation”, which is highly popular. A 4th book is on the way, hopefully by the end of this year, “The Grim Reaper Never Have a Work Break”. Of all these 3 novels that MXTX has published, “Grandmaster of Demonic Cultivation” is highly popular with Season 2 of the animation coming up soon later this year 2019. I can’t wait!!!! But in my opinion, “Heavenly Official’s Blessing” is indeed MXTX’s grandest and most intricate work and I believe it will be a mega hit if it’s been made into a film or drama with lots of cool CGI and special effects.
And finally, of all BL novels I have read so far, Hua Cheng, the male lead of this novel is my favourite BL character. Luo Binghe waited 5 years for Shen QingQiu; Lan Wangji waited 13 years for Wei WuXian but Hua Cheng waited 800 years for Xie Lian! Though he’s so obsessed with Xie Lian to wait 800 years for him and even carved out hundreds of Xie Lian’s stone sculptures, his obsession is still enviable and tolerable. (Unlike Luo Binghe’s psychopathic obsession for Shen QingQiu!

) Hua Cheng is a rich and powerful demon clad in a fashionable red robe outfit. Along with him are his millions of cute minions – the beautiful, glamourous, shimmering silver butterflies. Although he has only one eye, his other eye is cultivated on E-Ming, his curved sabre which has a life tied to Hua Cheng. Hua Cheng is indeed, a really special character who makes my heart cry and ache as he willingly gave up all that he’s got including all his powers and life for his love, Xie Lian. *spoiler!!!*
~SPOILER~
Xie Lian was a beloved handsome crown prince of prosperous Xian Le country. He ascended to heaven at seventeen to become a god, worshipped by millions. Many temples were built all over the country to offer him incense and worship him. But due to his ideals, kind hearted nature and conviction to save his people as a god, he meddled into the natural order of cause and effect and caused his rich and prosperous country to fall and his people to die and some take refuge in the neighbouring poorer country as second class citizens. Hence, his angry citizens burned down all his temples, destroyed his sculptures and paintings. He was eventually punished by the heavenly emperor and banished to the human world. With his constant bad luck and limited powers due to his cultivation as a Taoist priest, Xie Lan lived as a scrap collector.
Although he lived his life in humiliation both in heaven and in the human world, Xie Lian continued to help those who came to him for help. After being banished from heaven, his 2 trusted aides, Mu Qing and Fang Xin left him eventually and cultivated and ascended to become popular gods themselves, worshipped by many. His parents, the King and Queen escaped after the fall of their country and lived in the woods with Xie Lian and the 2 aides initially. The royalties lived in poverty and eventually committed suicide.
At that time, not only did Xian Le country fell, the people were also plagued with a highly contagious “human face disease”. Once contracted, these faces grow quickly on legs, bodies and faces until the victims go insane and commit suicide. The people heard that they will not contract the disease if they stab Xie Lian once with his black sword, and Xie Lian will not die since he’s been granted immortality by the heavenly emperor. Hence the coward people turned Xie Lian into a gory bloody stabbing pillow, but that didn’t mean he feels no pain when being stabbed. It was a heart wrenching scene. Even the little ghost fire (Guess who he is?) that witnessed this scene was distraught and traumatised for hundreds of years.
Xie Lian ascended to heaven the 2nd time to become a god but told the heavenly emperor he wanted to remain in the human world, realising that he couldn’t help the people being a god. In fact he had to stay away from affairs of the human world being a god. The heavenly emperor agreed and banished him to the human world again. Now, after every banishment, the ex-god got a black treacherous ring on his body. Xie Lian had one around his neck and one around his ankle. Had he known what these rings were for, Xie Lian would have requested the heavenly emperor to remove them immediately during his 3rd ascension!
After his 3rd ascension to heaven as a god… that’s when the story of the novel begins…. begins the exciting journey of Xie Lian meeting Hua Cheng (aka San Lang) as the most powerful supreme demon. Oh my god! Their first meeting was so romantic!

Xie Lian disguised as a bride in order to solve the missing brides’ mystery; and Hua Cheng was mistaken as the ghost bride groom. He patiently and meticulously escorted Xie Lian in the bridal sedan to the temple where the bodies of the brides were hidden. On the way, he gently held Xie Lian’s hand and guided him since Xie Lian’s head was covered by the bridal veil. He opened his red umbrella and shielded XL from the dripping blood from the hanging corpses above and his silver butterflies illuminated the way through the night.
The story develops with several sub plots and eventually led us to the final most powerful and unexpected antagonist of the story. Hua Cheng’s character was also developed along with the sub plots and we realised that all these while, he witnessed Xie Lian’s rise and fall from godhood and his most foolish and embarrassing moments. When the readers finally pieced Hua Cheng’s journey together, personally I cried a lot at the end when Hua Cheng self-sacrificed and died the 3rd time for Xie Lian. My heart pained and almost stopped with grief.
“It is my greatest honour to die for you in a battle. “ ~ Hua Cheng
But an enchanting story comes with a happy ending and 3000 illuminated lanterns floating up to heaven. That’s why I can read and re-read this novel over and over again and feel very satisfied. 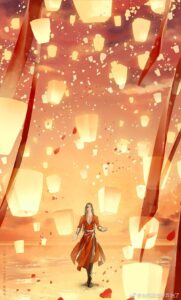 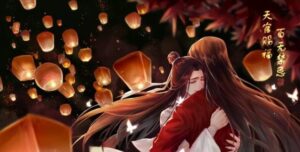 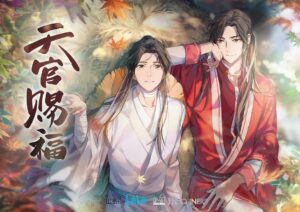 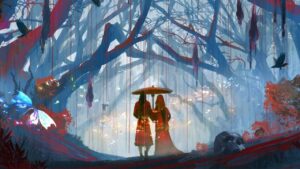