I had been wanting to read this for quite some time but hesitated if the story was already completely translated in English. I’m glad it was!

The setting of this novel is modern American – Los Angeles, Hollywood, New York. All the characters sound American to me.

This novel was written like a mini-TV drama series with 21 episodes. 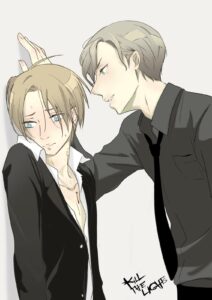 Mason Taylor was a veteran team leader of a group of mercenaries working for Zii corporation.

A mercenary is a person hired and paid to kill someone in cold blood. In a mission to Afghanistan to recover something important for Zii, he was shot dead by one of his greedy team member, Aaron. Ashley, another team member was shocked that Aaron killed their respected team leader had no choice but to flee with Aaron or be killed by him.

The original Hayley started becoming famous as a very beautiful blond child actor of Hollywood at the age of 7. Unfortunately, he got addicted to drugs, alcohol and gay sex in his later years. His taste in fashion was loud and showy and had piercings in his body. His acting skills sucks and his attitude and temper were vile. He was on the verge of getting fired by his production crew and going into bankruptcy. He was a total mess and was hated wherever he went, except he had a very loyal manager, Tony who stuck with him through thick and thin.

When Mason transmigrated into the body of Hayley Lusk, he learnt about the lifestyle of the original Hayley. Thereafter, he decided to live his life as himself except that he continued to leverage on Hayley’s acting career in Hollywood. Unlike Hayley, the new Hayley don’t take drugs, don’t smoke, don’t drink excessively and no casual sex. He exercised and improved his complexion and appearance, thereby capturing the attention of the rich and powerful Noah Raycarlton (ML)

Mason knew Noah since 20 years ago. When Noah was 7, he was kidnapped, stuffed and dragged in a suitcase. Thereafter developing Noah’s claustrophobia. Mason saved Noah from his kidnapper and he left a deep impression on young Noah. When Noah was 17, Mason was hired to be Noah’s bodyguard for a month. At that time, Mason’s wife and daughter were killed brutally and Mason avenged their death. Distraught by the death of his loved ones, Mason signed up and joined the mercenary company, Zii corporations. 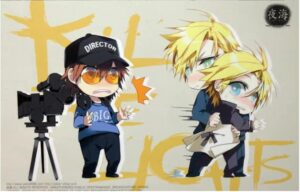 During that 1 month being with Noah, on and off at night, Noah would have nightmares and Mason would go comfort him. Unknowing to Mason, Noah treated Mason like his god and got very attached to Mason. He was distraught when he found that Mason was going to Afghanistan. Since he was still so young then, there wasn’t much he could do to make Mason stay with him or in America, except sending people to find out about Mason’s news. Likewise, Mason also grew very fond of the young and handsome Noah, but he wanted to remember his guilt for his dead loved ones, so he was determined to leave for mercernary missions.

When Noah met the new Hayley, he was captivated by him. He felt the new Hayley was different in many ways. After a period of careful observation and many clues left behind by the new Hayley, his suspected that “Mason” was in the body of Hayley. His identity was confirmed later on by Mason himself during the last show down scene with Aaron and Ashley, his ex team members who betrayed him.

Noah avenged Mason eventually and it was a happy ending! 🥰😘😍

I love both the characters of Mason and Noah as they both are not complete angels and goody-two-shoes. They are really hot-blooded yet there was no mushy confessions of love. There were also some plot holes here and there and some out-of-character of Mason as an ex-mercenary. But still, I enjoyed and felt happy reading this novel and will rate it 3.5/5.