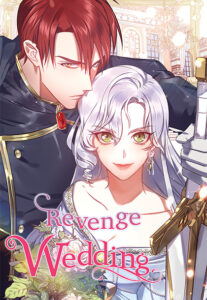 Meridian Sasha is the perfect woman who has the beauty, wealth, and status. She fainted and woke up on a ship in the middle of the ocean, with a wedding dress on. I got married? ‘Who dares to try and touch Meridian Sasha? I’ll make sure that he’ll never want to marry me!’ But the one who appears to be her husband is the War Hero of the Empire, Demetrius Kyros who suddenly took out his sword. How can that be a man who wants to get married? ‘I was wondering who invited me like this… Will I be able to go back if I kill you?’ ‘Move. I was forced to come here too.’ Two people kidnapped to be married. They have no choice, but to live in an island together… 1st goal, escape the island! Final goal, revenge and marriage!

What was unique about this manhwa was the use of social media and a hell lot of betrayal. It was quite interesting that they have combined magic and our current wifi and social media in this story, especially in that era because normally it is not the case. Also, this is a great way to explain how social media can be used as a platform for wars to happen. In the end, it is about garnering support of people and using them as tools to defeat your opponent.The betrayal here is immensely great as well. Just imagine having your parents drug you and send you off on a concealed ship with a man and a few maids to get married against your will. They also gas you and throw you and the other guy who you don’t even know on an island to survive. Moreover, on the island, the house they provided you was so old that when it rains, the roof was gone and the only protection spell they put in the house was your love bed (that was only the first chapter). On top of that, having your own cousin betray you and him wanting to kill you because of power was utterly disgusting (same applies to the Prince). And the weak-willed Emperor who can’t even control his own son and left the ruling of the Empire to him. The characters of the people in this manhwa are quite appalling and I would say the only ones who are worth reading this manhwa for will be the FL and ML.

Overall, I will say that this was a “not that great but not that bad” manhwa. It was rather interesting only nearing the end because that was when the full plot was finally taking shape. The whole storyline was rushed and so was the ending. However, let’s not downplay this manhwa too much, there are some scenes which are pretty funny and great to use after all. But for this manhwa, I will only recommend you to read it If and only if you have nothing else to read. I sincerely wanted to give up halfway but I read it till the end to make this review possible.