The Return of the 8th Class Magician 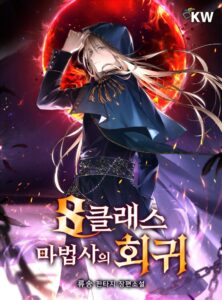 Decades of blood put for Emperor Ragnar and a unified empire I wanted to return to my hometown, atone for my sins, and live like I was dead

But “You are an 8th-class wizard who can devour me and my empire at any time” “How can I keep such a monster alive?”

Betrayed by Ragnar, his friend and lord, just before crossing the threshold of death, A dagger engraved with a time magic spell was inserted into the heart. ‘The pentinence I wanted was to give everything back’

Another unexpected good read from a non-shoujo manhwa. I pretty love this one and it is quite interesting. Reminds me of slime and I would really want to watch the anime adaptation of this because it will be so cool!!! I smell some romance coming from this manhwa so I decided to read it. It just started so I don’t have much to say about it except it might be quite predictable what will happen in the future (ps. I did not read any spoilers). I believe that a lot of people are already reading it because it is that popular and the art is just amazing. The ML looks SO DAMN FINE and I love how he acts. Maybe I should read these kind of manhwa more often!