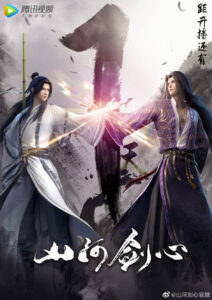 WOW!!! The animation is so cool! I quickly started reading this novel and this is truly a very good Xian Xia cultivation BL novel!!! I never felt bored once, although the romance is very slow and no smuts, but nevertheless the storyline is so worthy of a very high rating.

This novel is about the Taoist Sect Leader of Mount Xuandu, Shen Qiao who was defeated by Kun Ye in a duel. He fell off the Half Step Peak and was seriously injured. Luckily, he was saved by the Sect Leader of Huan Yue Sect, Yan Wu Shi and his disciple. Due to his injuries, Shen Qiao became blind temporarily, lost his memories and most of his “inner qi”.

Yan Wu Shi, who is one of the top martial art masters in the world, didn’t believe in the goodness and kindness in humanity. He believed that people are selfish and only worked or cooperated for mutual benefits. He trusted no one and there are no friends, only worthy rivals. At first, he scorned at Shen Qiao’s kindness, willingness to forgive and gentle ways as weaknesses and gullibility. However, the unwavering spirit of Shen Qiao aroused his eagerness to prove that people like him (Shen Qiao) will only be betrayed and taken advantage of. Again and again, Shen Qiao proved to him that he was not tempted and needn’t turn to the dark side to get what he wanted.

The turning point was when Yan Wu Shi betrayed Shen Qiao by exchanging him for his old sword with the villain, Sang Jing Xing. Yet Shen Qiao saved him in the brink of his death when he was almost killed by his enemies. Having received the benevolence from Shen Qiao, Yan finally realised that Shen Qiao was indeed the rarest treasure in the world. Fate brought this unlikely couple together as they watched each other’s back to defeat the Turks and become the most powerful martial art masters in the world.

What I like about this novel is the comedic vibes between the arrogant Yan Wu Shi and the humble Shen Qiao, even though Yan is a bad ass villain. His character is not one-dimensional. Even the villainesses and seductresses like Bai Rong and Yuan Xiu Xiu who were used to the righteous sects jeering at them for their dual cultivation methods, admired Shen Qiao when he told them he believed in the goodness in them and that they don’t have to get what they wanted the evil way. Bai Rong even released the women who were captured against their will by her sect when she became the leader of He Huan Sect. There is always a silver lining in the members of the demonic sects, a chance for repentance and atonement. 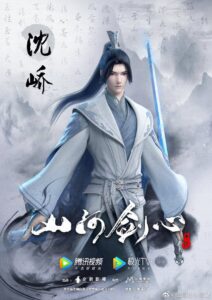 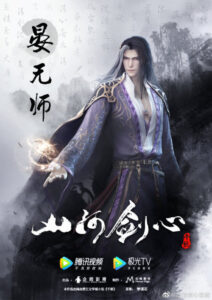 About twenty years ago, the Number 1 martial art master, Qi Feng Ge defeated the Turk, Hulugu. Hulugu had come to Central China with the ambition to collect all 5 of the martial art manuals (Zhu Yang Ce) in order to become the most powerful martial art master. He also wanted conquer and unify Central China. Hulugu was defeated and suffered serious injuries but Qi Feng Ge spared his life if he agreed to not set his foot into China for the next 20 years.

Shen Qiao was the disciple of Qi Feng Ge and Sect Leader of Mount Xuandu after the previous Sect Leader Qi Feng Ge passed away 5 years ago. His management style was very much aligned with his predecessors’ – kept low-key and stayed away from the happenings in the outside world. But his third disciple brother, Yu Ai, felt that Shen Qiao’s leadership was unable to keep up with modern times and maintain the No. 1 position amongst the Taoist sects. Thus he secretly cooperated with the Turks, poisoned and sabotaged Shen Qiao before his duel with Kun Ye. Yu Ai later assumed position of the Sect Leader of Mt Xuandu, replacing Shen Qiao.

Shen Qiao who was poisoned by Yu Ai before the battle. He lost the duel with Kun Ye and fell off Half-Step Peak. Luckily he was saved by the powerful and arrogant Sect Leader of Huan Yue Sect (demon Sect), Yan Wu Shi and his disciple. Shen Qiao’s recovery took a few months as he lost his sight and his memory

Other than Shen Qiao’s very good looks, Yan Wu Shi was initially interested in Shen Qiao’s copy of Zhu Yang Ce manual after discovering there was some ”inner qi” left in his body as a result of learning the martial arts from the Zhu Yang Ce manual. Subsequently, Yan Wu Shi failed in many ways to get Shen Qiao to join his Huan Yue Sect. He became somewhat interested in Shen Qiao after the latter showed kindness, benevolence and consideration to others without expecting anything in return. Yan Wu Shi, who saw Shen Qiao’s easy-going and kind demeanour as weaknesses, was determined to prove to Shen Qiao that with his character, he would be betrayed and taken advantage of by the people around him. In Yan Wu Shi’s eyes, everyone was selfish. There were no friends but only worthy rivals worth his attention. So Shen Qiao with his current condition is not even considered his rival worthy of Yan Wu Shi’s attention. Yet, Yan Wu Shi found great joy teasing Shen Qiao and messing with him, giving outsiders impressions that Shen Qiao was his toy boy, which was really hilarious.

In order to prove to Shen Qiao his point of view, Yan Wu Shi betrayed Shen Qiao’s friendship in exchange for his old sword back with Sang Jing Xing, another villainous Sect Master of He Huan Sect (demon Sect). The battle between Shen Qiao and Sang Jing Xing caused Shen Qiao to almost lose his life. Luckily Shen Qiao was saved again by a little boy, Shi Wu whom he saved earlier.

As Yan Wu Shi had many enemies and backing from the current Emperor, the other Sects were jealous of him and decided to gang up against Yan Wu Shi to eliminate him (and the Emperor). Yan Wu Shi was overpowered and died. Shen Qiao who heard news of the ambush decided to rescue Yan Wu Shi, but he arrived too late, only in time to collect his dead body. He realised that Yan hadn’t died yet since there was a very weak trace of “qi” left in him. Shen Qiao brought Yan to a small village to recuperate.

When Yan was recovering from his serious injury, he had 3 split personalities and they were all so funny and hilarious! There was Xie Ling – the quiet, gentle and childish little soul who loved Shen Qiao the most and loved to eat candy-man. Xie Ling called Shen Qiao “Pretty Brother”. Ah Yan was the one who enjoyed teasing Shen Qiao and he called Shen Qiao “Ah Qiao”. And the third is Yan Wu Shi, the one who was the evil bad-ass personality who betrayed Shen Qiao and sent him to Sang Jing Xing in exchange for his old sword back. It was probably due to the kind ways Shen Qiao treated Xie Ling that made Yan Wu Shi saw another dimension of Shen Qiao – his smiles, kindness, friendship and a sincere heart which touched Yan Wu Shi greatly. As Yan gradually recovered, the other two personalities assimilated back into Yan Wu Shi. Having been on the receiving end of Shen Qiao’s kindness, Yan Wu Shi finally realised that Shen Qiao was the rarest treasure in the world. He started woo-ing and doting Shen Qiao, following him wherever he went.

Romance between this couple is really slow and their first kiss is around Chapter 108, I think. But all these while, Shen Qiao was still struggling, not knowing how to deal with Yan Wu Shi’s teasing and flirtatious advances. As Shen Qiao recovered most of his “inner qi” and improved his martial arts, he also regained his sight. Eventually he managed to take revenge on the people who betrayed and schemed against him – his eldest and third disciple brothers and Kun Ye. He also became famous to be ranked among the Top 10s of martial art masters (I would say he ranked 2nd or 3rd) and resumed being Mt Xuandu’s Sect Leader again.

Yan Wu Shi, who was afraid that Hulugu will continue to give Shen Qiao trouble at Mount Xuandu, challenged Hulugu in a duel. Yan Wu Shi won the battle, making him the No. 1 martial art masters in all of Wu Lin. Hulugu died in the duel and this kept the Turks away.

You must read the extra chapters too ! This is where the couple’s romance continued. Shen Qiao finally reciprocated Yan’s love for him in the 6th and 7th extra chapters. 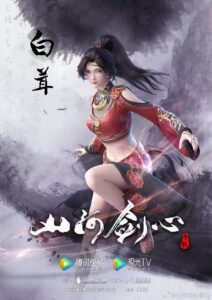 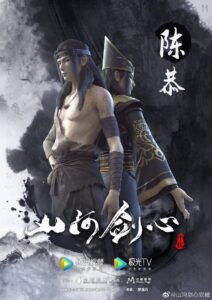