English translation is completed for this novel!

After all the intense smut I consumed the past 2 weeks reading Desharow Merman, this novel and romance feels bland and a bit boring. 😂 I’ll personally rate this 3/5. 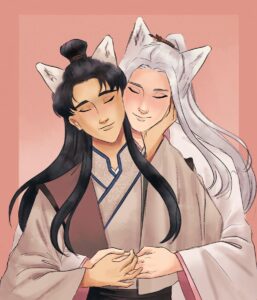 Song Ci (MC), whose real name was Liang Shuhong, led a scholarly life. Although his clan produced many scholars and officials and he lived quite a well-off life, it was a sad one for him, since his mother Madam Liang doted his younger brother who died very young and she pushed all the blames to Song Ci, among many other things. Angered, Song Qi left home to become a monk only to be killed. Before he died, the Divine Emperor, YanSong offered him a new lease of life – eat the fruit (stained with the Demon King’s blood) if he don’t want to die, but he had to pay a price and that is he will become a demon after eating the fruit. Song Ci ate the fruit and became a demon. Thereafter he was constantly chased by demons who wanted his blood as it was the blood from the heart of the very powerful Demon King. 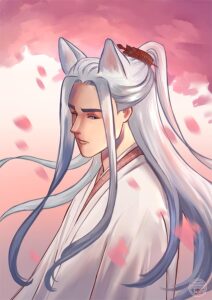 In one of his adventures or the first arc of this novel, Song Ci met a very handsome and powerful immortal-looking Rong Bai in the city of Le Yu. He made some friends along the way and one of them was Big Beard who advised him that if he wanted to enter the Demon Realm, he should follow the cold, temperamental and ruthless Master Rong.

Song Ci trailed Master Rong for several days and finally managed to be permitted to travel with Master Rong to Mo Yan, a prestigious cultivation sect.

Master Rong (ML) is an immortal, Tu Shan Rong Bai from the Tushan Fox Clan. This immortal fox clan is highly revered in the Divine Realm. Since young, he was very talented and cultivated 9 tails which symbolised power. He is the one and only true blood of the of the Tu Shan clan who can control the powerful blue flame. Even his father and other elders do not have that power. But Rong Bai’s childhood was a very sad one. His mother, although the legitimate wife, was not loved by his father and was even crucified and killed by his father. Rong Bai was abused by his father since young so he trained very hard in combat and magic skills to become the most powerful lord of the 6 realms. 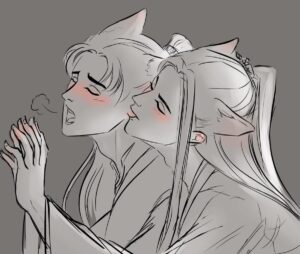 After Rong Bai announced his unwillingness to his marriage to the princess of the Vermillion Clan on his wedding day and killed a clansman, he extracted a drop of blood from his heart and denounced himself as part of the Tu Shan Clan. Thereafter, in his rage, he killed many immortals and demons. He even single-handedly subdued half of the 12 demon capitals in the Demon Realm. The rest of the kings in the Demon realm quickly elected him as the Demon King. Rong Bai is so powerful that he was feared by most in the 6 realms.

Thus, when Song Ci ate the fruit stained with his blood from his heart, Song Ci also had the true blood of the Tu Shan Fox Clan and he later learnt to cultivate his powers with some pointers from Rong Bai as they embarked on a journey to retrieve fragments of the Devil Seal. 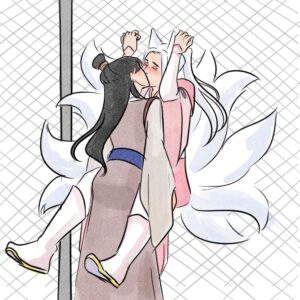 Here is the list of arcs in the novel. This list is not listed in the contents page but I just jotted them down as the story progressed.

6. The theory of No Demon book

In Tu Shan Rong Bai’s arc, in order to save Rong Bai whose soul is not complete, Song Ci time-travelled to the ancient times to keep Rong Bai company and inject a purpose to keep on living. The couple fell in love and Song Ci became something Rong Bai cannot live without. But in a battle during Rong Bai’s wedding day, that day when Rong Bai extracted his blood, Song Ci vanished to the present times, causing RB to be so aggrieved that he sealed painful longing memories of Song Ci in part of his soul, causing his soul to be incomplete. After thousands of years, Song Ci was a hazy memory. But he didn’t want to unseal that piece of soul as he was afraid he couldn’t love the present Song Ci wholly. Song Ci finally cleared up the misunderstanding and told RB that that person was him as he had time-travelled to the past when RB was unconscious.

Since Song Ci time-travelled, thus some variables had changed. When the couple first met at Le Yu City, Rong Bai felt some familiarity with Song Ci, and later he continue to fall in love with Song Ci, doting and loving him to the moon. 💕

Disclaimer: I do not own these pictures. They belong to fans of the novel and from translator websites. 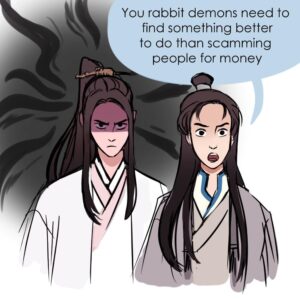 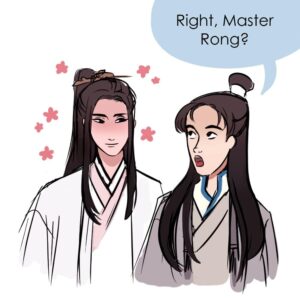 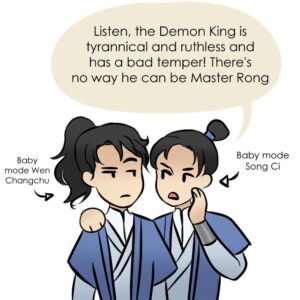 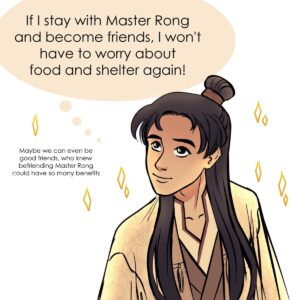