Thanks to a bl fan and friend of mine who recommended me to read this book. It was a hilarious and fun journey following through this ABO bl novel! It’s not common finding Omegaverse bl novels.

If you like bl novels on #SchoolLife  #Modern  #RomCom  #ABO #AlphaBetaOmega #Omegaverse then you’ll surely enjoy reading this novel!

I rate this novel 3/5 as I felt that there were too many banterings in the beginning and the story only started getting interesting (to me 😜) from about Chapter 40.

Another interesting ABO read is in the BL novel, Quickly Wear The Face Of The Devil, Chapter 11 Copying an ABO.

Here’s a guide to Omegaverse if you want to find out more about the characteristics  of Alpha and Omegas.

[The Unofficial Guide to the Omegaverse] 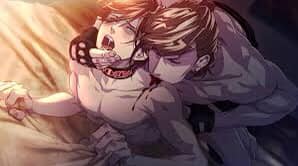 Duan Jia Yan (DJY), the MC , is a well-known school bully and has lousy grades. He plays basketball really well, is very handsome and has many admirers. All these while, his gender was a male Beta who was later found to be a late-developing Omega.

Lu Xing Ci (LXC), the ML, is the male God in school. He is not only very good looking, he is also very rich and is the top scorer in both the school and province in his studies. He not only excels in studies, he also excels in sports. He is a male Alpha and has many admirers.

DJY doesn’t like his classmate, LXC because all the girls he likes, would rather chase after LXC, the male Alpha.

But an “accident” happened when DJY became a late-blooming Omega instead. He was unaware when his body started emitting sweet-smelling Omega pheromones. Luckily, LXC was nearby and helped him get an inhibitor and warded off potential sexual attacks from another Alpha.

As DJY was later diagnosed with an Alpha Stress Disorder, a common painful disease amongst Omega when they are in heat and their body became allergic to Alpha’s pheromones. It was found that LXC’s alpha pheromones is a very rare 99% match that is able to provide cure and comfort to DJY when he is in estrus and suffers the stress disorder. His sufferings can only be alleviated by allowing LXC to temporary mark him, saliva kissing, long time hugging or permanent marking through sex.

In order to relieve his stress disorder, DJY always looked for LXC to temporary mark him by asking him to bite his vein on the back of his neck and inject his alpha pheromones. The side effect is that if they do this too frequent, the alpha might lose control.

But being the best ML, LXC practiced self control, not taking advantage with this Omega whom he started falling in love with. Even though this Omega was drunk twice, and came to comfort him during his alpha rut, he resisted the temptation and protected DJY instead. Being a protective Alpha, LXC constantly protected DJY from attacks from other alphas like Qiao Nan who was hot on his heels wanting to mark DJY permanently.

DJY was resistant to LXC’s advances initially and preferred to remain as friends and he wanted to make sure if he agrees to have LXC as his boyfriend, it should be because he loved him and not because he needed LXC to relieve his stress disorder. Eventually, DJY was touched with all the protection, gentleness and doting from LXC and agreed to be with LXC. Oh Gosh… they are so “yellow” showing their affection that I start to see their intertwining alpha and omega love pheromones floating in the air! 🥰💞💕💗