I picked this novel after reading several 5 stars positive reviews about it. Took me almost 2 weeks to complete all 167 chapters this time round! This novel is so engaging that I practically didn’t do anything much the past 2 weeks except binge read this novel. I’ll have to rest my eyes for the next 2 to 3 weeks and catch up with my life and arrears.😅😜

The plot is deeper than the synopsis provided on the web for this novel. Tags for this novel include:  criminal underworld organization, family relationships, hatred, vengeance, revenge, betrayal, torture, reborn, rebirth, transmigration, love, romance, loyalty, trust, forgiveness, brotherhood, slice of life and determination to work towards a better life and a better future. 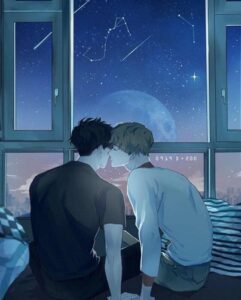 Shi Jin was the 6th son of Shi Xing Rui, who owns a huge business empire. He had 5 other successful and famous older brothers but they all were born from different mothers.

The Shi family background was a bit complicated and it all started from Shi Xing Rui and a pair of orphaned Jian brother and sister. Shi Xing Rui fell in love with the brother, Jian Jin Wen. He was devastated when Jin Wen died. Thereafter, Shi Xing Rui was obsessed with the idea of having a child who looked like Jin Wen, thus started his harem of women. These women, selected for their looks, had to give birth to sons. (Daughters had to be aborted.☹️)  Unfortunately, the first 5 sons didn’t resemble the deceased Jian Jing Wen. Shi Xing Rui did not marry these women nor looked after these 5 sons. Instead, he compensated these mothers a large sum of money each.

Finally after waiting for 10 years, the younger Jian sister, Jian Yun Jin was 18 and she looked very much like her deceased older brother. Shi Xing Rui fell in love with her and they gave birth to Shi Jin who resembled Jian Jin Wen. (What have you done, Shi Xing Rui? You could have waited for 10 years and marry Yun Jin and not meddle with the other 5 greedy women and gave birth to 5 sons whom you were never gonna love??!!! Hiaz…😤) Shi Xing Rui died when Shi Jin was almost 18. He left his entire fortune to Shi Jin only and nothing for the other 5 older brothers and their mothers (especially eldest brother’s mom).

As a result, after the funeral of Shi Xing Rui, Shi Jin discovered the attitudes of his 5 older brothers changed drastically overnight. These brothers had never received love, care and recognition from their father. All along, they were jealous and hated Shi Jin but had to pretend to be friendly to him. They showed their true colours after their Father died and were cold, distant, cruel and vengeful towards Shi Jin. They kidnapped, tortured and disfigured him, tried to murder him in a car accident, give him mental trauma and threatened to kill him in the hospital until Shi Jin finally died from their cruelty.

All these while since the torture inflicted on Shi Jin, Xiao Si (Little Death) who was the System of Death Progress Bar, was observing quietly… wondering if he should save Shi Jin or not. Shi Jin was afterall a fat, pampered good-for-nothing rich man son. But then, he did nothing wrong, yet he was tortured so mercilessly by his 5 older brothers. The 5th brother told him that his existence was a mistake so he could only die in his hands.

Xiao Si decided to save Shi Jin. But first,  he had Shi Jin transmigrate to another Shi Jin in an alternative world where he enjoyed warm family love from his foster parents, had many friends and led a happy and meaningful life being a lean and fit policeman.

After that, Xiao Si turned back the clock again in the original Shi Jin’s world to the time after Shi Jin’s father’s funeral. This is the second chance for Shi Jin to live his life again all over again and make a difference.

Apparently, Xiao Si had tried to help 998 people live in the past but they all died in the end and Shi Jin was the number 999th and Lian Jun (the ML) was the number 1000th! Lian Jun was the last person Xiao Si could help. Shi Jin needed to ensure both progress bars be emptied to ‘0’ in order for him to secure his life permanently.

The first thing Shi Jin did in this second chance of life was to refuse his huge inheritance. He told his father’s lawyer to distribute all his inheritance to his 5 older brothers. He will not take a single cent. Thereafter, he ran away from home and disappeared from his family’s radar.

Shi Jin sought shelter from Lian Jun and trained hard to become one of the members of Lian Jun’s “legal” underworld organisation. His hard work transformed the fair and fat Shi Jin into a very handsome, lean and fit young man. His looks and attitude improved and changed drastically and yet with Lian Jun’s powerful backing,  his 5 other successful and famous brothers had to take him seriously.

Now, he’s faced with the task to reduce the 2 death progress bars and ultimately bring them down to zero. He had to either kill all his 5 older brothers (and probably their mothers) or eradicate their vengeance, hatred and threats to his life; and protect Lian Jun, now that they are bound by fate and the death progress bars… 😂

The plot weaves a very heart warming and touching story of how Shi Jin worked things out with his 5 older brothers who wanted to kill him. He suffered a lot of pain, fear, anger and nightmares, yet his kind hearted, forgiving nature, warm personality and determination managed to win over his brothers’ affections. Xiao Si helped a lot when he sent Shi Jin to transmigrate into the alternative world to receive and experience family love and friendship which he would otherwise never have experienced them in his original world.

Lian Jun was the best lover who gave Shi Jin lots of emotional and moral support and powerful backing. This underworld organization big boss is so powerful yet he’s so doting and gentle to his young lover. I really enjoyed their chemistry, fun and loving moments together. 💞💞💞

The ending was very happy and satisfying although there were some parts nearing  the end that was very touching that I cried shamelessly. The plot got more interesting from Chapter 24 onwards.