Somehow I kind of suspect the author is a cat lover and this novel is probably her fantasy of her pet cat. It’s probably written in the middle of the night when she got quite lonely… Anyway… it’s just my suspicion after reading this novel… hmmm… 🤔 Mature contents? Errrr… how should I put it… every arc has sex scenes but lack of details…lol!!! What a tease for our imagination! 😅 Every different kitty cat has a human form for  just that… 😃😁😂 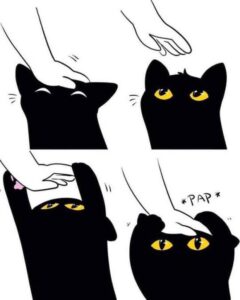 Gu Yan is a famous author whose novels are very interesting to read… except that he always ends his story in an unexpectedly terrible and disgusting way like the world is annihilated by evil beings and so on. As a result, his fans were angered at his endings. After he uploaded the final ending of his last novel on the web, his large number of fans were so angry that triggered the system, 037 to force Gu Yan to “travel” to his novels as a canon fodder to complete his “quests” in order to appease his fans. (How and why? Anyway…. just let it be since it’s a fantasy novel. 😂)

There were 4 novels and thus there are 4 arcs and 1 real world.

In each arc, or novel that Gu Yan wrote, he took the role of a canon fodder who was destined to die in a horrible way. In the first arc, he woke up as a human in front of a Heidis cat which was large, dangerous and powerful. Their favourite food was humans. However, the cat was seriously wounded after a battle and was hiding inside a cave recuperating from his injuries. As its injuries were too grave, it could not assume its human Heidis form. The injured cat needed food to heal quickly and Gu Yan was a human which was the best treat for the cat. It nearly wanted to kill Gu Yan but quick-thinking Gu Yan managed to appease the wounded big cat using his caressing actions and soothing voice. After living with the cat for a few days in the cave, the cat licked all over Gu Yan “marking” him as his possession. The cat’s human form was a young and handsome prince and potential heir to the throne, Eli. He fell deeply in love with Gu Yan. When the pair returned to Eli’s kingdom, Eli enjoyed being carried and caressed by Gu Yan by turning himself into a smaller form cat. Gu Yan couldn’t help calling the cat “Qiu Qiu”, which was the same name of his own pet cat at home in his real world.

But in this first arc, it ended so sad, I felt so unhappy that i told myself that if the 2nd arc ended the same badass way, I’m going to drop this novel.

The 2nd arc is a Xian Xia world, ie… ancient China, demons and cultivations theme. The story reminds me of “The Scum Villain’s Self-Saving System” #ScumVillain . In this arc, the “Qiu Qiu” appeared in the form of a taotie large cat (looks like a huge fierce tiger). His human form is Jiang Tan who eventually became the most powerful being in this world.

The 3rd arc was an ESports world. Gu Yan was an eSports player as a magician. But his “Qiu Qiu” appeared in the form of Asa, the system of the virtual world. Asa can control anything in the virtual and electronic world and may even take control of the real world. Since Asa controls everything in the eSports games, he could assume the identities of all the bosses like the Demon King, God of Death, Elf King and Black Dragon. Yet he still changed himself into a little docile kitty cat so that it could stick to Gu Yan’s body and enjoy his caressing. Gu Yan even spent a fortune getting Asa a robotic man and robotic cat so that Asa can touch him in the real world! Lol!!! 🤣

In the final arc, that’s the 4th arc, Gu Yan was an ordinary human who trained to become a master (someone who can exorcise ghosts, geomancer, fortune teller etc) whilst his “Qiu Qiu” was Xie Lan, the most powerful ruler of the netherworld. He was a thousand year old ghost king  and was so powerful he could even annihilate the human world anytime.

Eventually, being such a powerful being, Xie Lan or “Qiu Qiu” was able to time travel across worlds to reunite with Gu Yan.

This novel is sugary sweet and the MC and ML are so in loved and sticky with one another. The male lead was stereotypically the most powerful being that makes the development of the story so predictable. The male lead didn’t talk much either… probably much lesser than Lan WangJi. I didn’t like the author’s writing style either so I’ll only rate this novel 3/5.