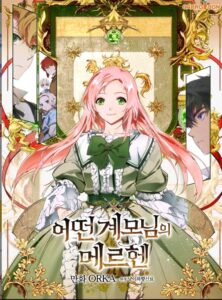 The iron widow, the spider widow, male hunter, the witch of Neuwanstein castle, the embarrassment of noble ladies……. These were all the words used to describe the Marchioness, Suri Van Neuwanstein. Despite receiving such criticism from the world, she raised her ‘children’, who were unrelated to her by blood and were old enough to be called her siblings. And finally, on the day of the first son Jeremy’s wedding, she felt that all her hard work had tied all the loose ends together. But she had been terribly mistaken. After hearing the message requesting her to not attend the wedding, she got caught up in an accident and died while leaving the castle. But when she opened her eyes, she woke up on the day of her husband’s funeral, seven years ago. I refuse to suffer any more. I won’t live as I had in the past a second time!

This Manhwa is SUPER INTERESTING!!! The plot is pretty unique and the characters are interesting. It just gives you unexpected things and it can get pretty dark too. Out of all the characters, I like Nora the most…probably because he was the nicest and the most mature among the lot. I felt that the assh*le prince needs some fixing in the head and sometimes the king/queen needs to pull him by the collar. But I mean, his REAL mother is dead so there is no one to stop him. I also greatly dislike Nora’s parents because of how blinded they are by the prince’s lies and how weak the mother is to her husband (and spouting lies into Nora’s ears and thankfully he didn’t believe them). I honestly can’t wait for Shuli and Nora to become a couple because from the spoilers, they sound pretty good! And is Shuli actually younger than Jeremy (her step-son)? Because they said that Shuli was younger than Nora, who is the same age as Jeremy….so the Duke (who is/was her deceased husband) married someone WAY YOUNGER than him??? And he groomed her to act as a mother of someone older than him???? This part always makes me feel weird. But anyways, I can tell that Nora likes Shuli a lot from the first time they met and I am a strong supporter of their relationship. Also in the recent chapters, there was Rachel and the foreign prince and they already hit it off pretty well. Hmmm so interesting….so who got married to Ohara? Because the spoilers also said that Ohara (who tried to seduce Nora by the way) became part of the family. Did SHE get married to Jeremy as planned? Or did she get together with Elias who is a possible candidate from the trial chapter?