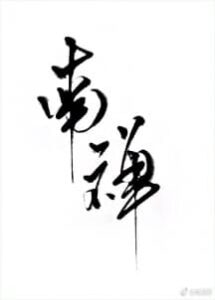 A bl novel fan recommended me Nan Chan sometime last year. Thank you for your recommendation, this is truly a captivating xuan huan fantasy BL novel! 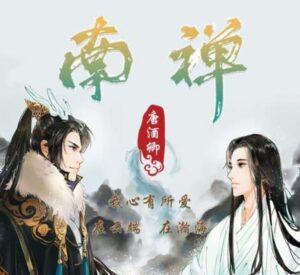 Nan Chan is an enchanting story about a deity and a demon who amidst power struggle and betrayal around them, stood firm on their calling to save the world and bring peace to the 3 realms. This unlikely couple of a deity and a demon fell deeply in love with each other but their love was short-lived as they succumbed their fates to more powerful evil forces. Having “died” once, the couple rebuild their spiritual power and regained lost memories with the help of a magical copper bell which led them to experience 8 sufferings. They eventually eliminated the most powerful antagonist of all with the help of their (unlikely) friends.

Through this novel, one gets to learn that the one who proclaimed himself “Heavenly Father”; or the embodiment of a True Buddha is in fact ironically, the greatest evil. Whereas the greatest demon lord is the peacekeeper of all 3 realms. 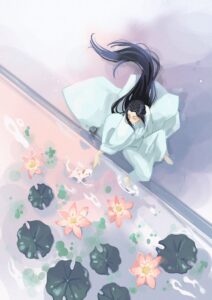 When I began reading this novel, Nan Chan, I didn’t find it exciting because the MC, Jing Lin was a fallen deity whose body was a broken mess and he lost most of his memories. He was sleeping most of the time whilst the other creatures around him were very lively like the brocade carp, the five coloured bird and the little stone man. Since Jing Lin was always sleeping, I felt very sleepy reading this novel too, often dozing off mid-way. Sleep is contagious!!!  I only started getting used to the novel setting around Chapter 30 and got hooked about Chapter 60 as the brocade carp, Cang Ji got more amorous!

Cang Ji is the ML who had a voracious appetite but he liked to suck Jing Lin’s blood most and if he could devour Jing Lin was all the better for him! Devouring Jing Lin was his very primitive desire initially which blossomed into possessive, protective and deep love for him. This brocade carp with a reverse scale turned out to be the greatest demon lord whose original form was a dragon, which could devour heaven and earth ! Jing Lin is his tribulation and their fates intertwined 1400 years ago. 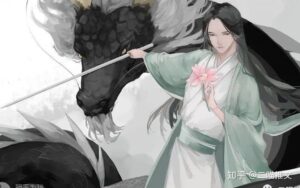 As I started getting into the story, it felt as if I was watching a fantasy Chinese drama with lots of fighting, magical elements, mythical beasts, demons, immortals with lots of awesome cinematic animations. I really hope this novel catches the eyes of the producers to make animation and drama out of it because this novel is indeed worth it.

English translation is completed by Lianyin of Jade Rabbit!

There’s a man I love.

In the clouds. In the sea.

Chapter 1 is a flashback of the events that happened 500 years ago when the MC, Jing Lin turned the heavenly realm into a blood bath. He killed his father and was later “annihilated” by the True Buddha. 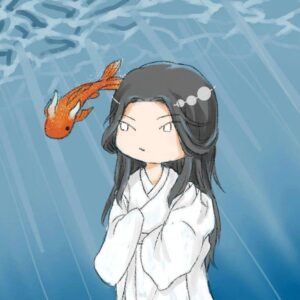 Chapter 2 begins with 500 years after the blood bath in the heavenly realm, and when everyone thought that Jing Lin a.k.a deity immortal Lord Lin Song was dead… well, he didn’t die. The novel started with the brocade carp, Cang Ji, looking fascinatingly at Jing Lin, who was sleeping most of the time, recuperating from a very serious injury. Jing Lin had lost almost all of his spiritual powers and memories. All that was left was a broken mess of a body, a broken sword, Yan Quan, which was nowhere to be found, and a little stone figure.

Ah Yi, the five coloured bird of the Can Li Tree came to visit but ended up stealing Cang Ji in his porcelain bowl from Jing Lin. He threw Cang Ji into a pool with a serpent out of pettiness, but luckily Cang Ji was saved by Jing Lin. Due to the shock, Cang Ji evolved into his human child form. Thereafter, he kept close to Jing Lin to absorb his spiritual aura and even sucked his blood. He had the desire to grow bigger and more powerful quickly, so that he could possess Jing Lin. He wanted to devour Jing Lin too, recognising that Jing Lin was his treasure. But this was his primitive desire which eventually blossomed into possessive, protective and deep love for Jing Lin as he learned and experienced life’s sufferings – which make one human.

Cang Ji “If you like someone, then you should devour him into your belly. Otherwise, others will snatch him away.”

Jing Lin “If there’s someone you love in the future, he must be a very competent person among all the three realms.” 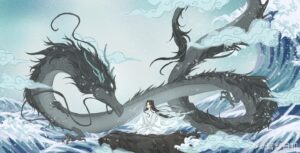 Due to the invasion and disturbances of Xue Mei (the snow demon), Zong Yin (the Jiao Dragon which had yet to evolve into the Blue Dragon) and Ah Yi, Jing Lin lost the copper bell which belonged to his younger sister, Qing Yao. His desire to look for the copper bell led him and Cang Ji to experience the 8 sufferings. Each of these experiences can be quite dark as it included child and human trafficking, prostitution, murder and gore. 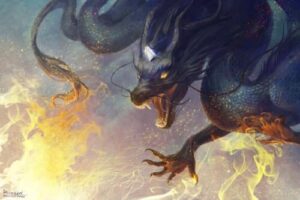 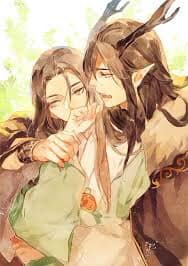 The most angsty and heartbreaking story was Cang Ji’s experience at Wang Chuan River. He regained all his memories of his past more than 1400 years ago as the ‘cang long’ or blue dragon, revered as a demon god on the same level as the True Buddha. He was Cang Di and he’s the King or God of all the demons as they revered him as “Di Jun”. He was the only obstacle that obstructed Lord Jiu Tian’s ambition to rule all the 3 realms.

At that time, due to the presence of Cang Di, it was difficult for Lord Jiu Tian to have his Ninth Heaven Sect dominate the 3 realms. The blood sea was to fill the lapses in his unstable cultivation whilst Jing Lin and his other 7 adopted brothers were Lord Jiu Tian’s pawns and righteous facade that he created for the outside world. Jing Lin was the most powerful deity, Lord Lin Song, whose original form was the Yan Quan sword that can slay anything – demons, deities, immortals and so on. He was just one step before reaching the final Great Accomplishment Stage in his cultivation.

Luckily, Jing Lin is pure and righteous, with a calling to eliminate evil. During one of his visits out of the heavenly realm, he started having doubts about what his Heavenly Father, Lord Jiu Tian was doing with the blood sea and the mystery of the disappearing children. He met Cang Di who disguised as a merchant and who followed him in his investigative missions, occasionally guiding and protecting him. Love and friendship bloomed and Jing Lin also discovered Cang Di’s identity but he did not expose him. Cang Di urged Jing Lin not to be too trusting when he returned to the Ninth Heaven Sect. 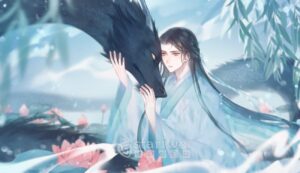 Jing Lin eventually discovered the ambition of Lord Jiu Tian, the Heavenly Father. Unfortunately, it was too late. Cang Di was sabotaged and cornered by demons in the blood sea, Li Rong and the three thousand heavenly troops. Cang di was slained by Li Rong and Jing Lin was later imprisoned in a sarcophagus by Lord Jiu Tian. It was so heart breaking as Jing Lin hugged Cang Di’s dying body, crying in the rain. His imprisonment inside the sarcophagus for 900 years was tormenting and gut wrenching too.  I think of the entire novel, this is the saddest part. 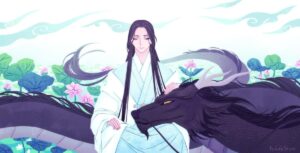 When Jing Lin was released 900 years after the death of Cang Di, he had severed all of his emotions by then, containing them all in the little stone figure, which was actually Jing Lin’s split entity. The little stone figure had been around since Jing Lin was a child, containing all his childishness at first. Now it contain Jing Lin’s emotions. During an opportune time when Lord Jiu Tian was very sick due to poisoning by his scheming adopted brothers who were secretly fighting for the throne, Jin Ling slayed his father to take revenge only to be annihilated by the True Buddha. Fortunately, he swallowed the prayer bead given by Goddess Shengyue (Jing Lin’s mom) which saved his life and Li Rong gave Jing Lin Cang Di’s reverse scale 900 years ago, so that Cang Di may be resurrected. 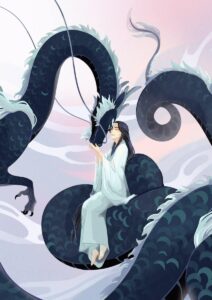 After Cang Ji regained all his memories at the Wang Chuan River, the final, grand scale bloody battle between good and evil followed soon after. Deities and demons fought alongside against the evil forces of Lord Cheng Tian and Lord Jiu Tian (True Buddha).  We learnt that Lord Jiu Tian was a split, sinful entity of the True Buddha, just like Jing Lin and the little stone figure. In the beginning, the True Buddha was seduced by Goddess Sheng Yue who gave birth to Jing Lin. Since the True Buddha cannot attain enlightenment to become the embodiment of Heaven and Earth, he had no choice but to create another him in Lord Jiu Tian who carried his desires, sins and ambition. But since Jing Lin had slain Lord Jiu Tian’s body 500 years ago, the 2 entities now merged into the True Buddha, making him a messed up split personality.

Cang Ji evolved into the blue dragon and Jing Lin attained the final stage of his cultivation – Great Accomplishment Stage when fighting the True Buddha, having completed experiencing the 8 sufferings. In the end, the couple and their unlikely friends like Yining, Zui Shan Seng, Dong Jun, Li Rong, Zong Yin, Ah Yi, Fu Li, Hua Shang, Shuran and the other demons won the battle against the mighty True Buddha.

The 3 extra chapters are about Cang Ji and Jing Lin’s wedding, their new life and home which you mustn’t miss ! Phew! The author spared me the agony of reading about them going through the customary Chinese wedding! Hahaha!!!! Bed activity was definitely more important which I totally agree!!!!! 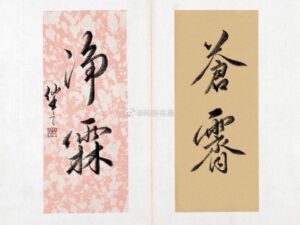