The Scum Villain’s Self Saving System

The Scum Villain’s Self Saving System

This was the 3rd BL novel I read, written by the author of Mo Dao Zu Shi (or Grandmaster of Demonic Cultivation) and Heavenly Officials Blessing. This is a xian xia, cultivation novel. 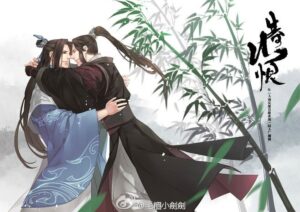 After being spoilt by the great works of this author’s 2 very popular bl novels, I decided to read Scum Villain. As this novel was the author’s first work, I was a tad disappointed by the story at first and felt that the male lead, Luo BingHe was more of an obsessed possessive psycho ‘gong’ (or top …😂). But then the male leads of Mo Xiang Tong Xiu’s novels are all fiercely devoted and emo types (which I like!). Lan Zhan waited 13 years for Wei Wu Xian to transmigrate and return; Hua Cheng waited 800 years for Xie Lian; and Luo BingHe hugged Shen QingQiu’s lifeless dead corpse for 5 years!!!!! 🤣 I wouldn’t mind if some handsome and charismatic guy out there would be so crazy and loyal to me to do all these just for me!

This author, has a new BL novel coming up by end of this year, “There is no rest for the Death God”.  I really can’t wait to read it!

This is the 2nd time I’m reading Scum Villain and found that it has a comparably good story. (compared to those bl novels I read halfway and dropped.) This novel would be even better if there were more skinships and interactive moments as couples between the MC and ML. I found these lacking since and MC and ML were like playing a cat and mouse game especially after the MC kicked the ML into the demon world’s Abyss and the MC was afraid that the ML would take revenge on him. And that the fact that the MC was a straight male and it took the male lead, Luo Binghe a great deal of effort to bend him. MC eventually relented to be bent only towards the end in order to save the male lead. 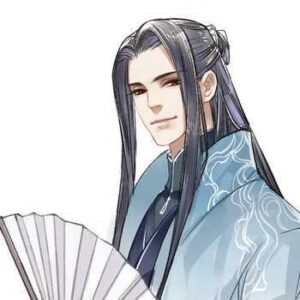 “Stupid author, stupid novel!” were the last words cursed by Shen Yuan before he died… but these words triggered an activation code for his soul to transmigrate to the Shen QingQiu character of the novel, of all people!!!!! Hahaha!!!! 🤣

In the rotten original novel, Shen QingQiu was the Lord of Qing Jing Peak (or Silent Mountain), which was part of the Cang Qiong Mountain Sect. He was the also the Shizun (or respectable teacher, master) of the protagonist male lead, Luo BingHe. SQQ , the scumbag villain, along with his other disciples, enjoyed abusing his little disciple, LBH. SQQ also killed his 2 martial brothers of the Cang Qiong Mountain Sect and harboured lecherous intentions towards his female disciple. 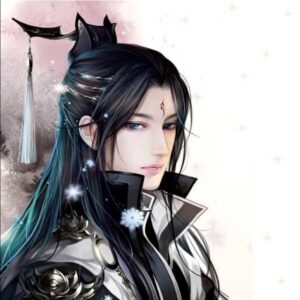 What he didn’t know was that LBH is the bloodline of the heavenly demon race. His father was Tian LangJun, the leader of the demon realm and his mother was a human, Su Xiyan, a disciple of a respectable cultivation sect, Huan Hua Palace. After SQQ pushed LBH into the demon realm’s Endless Abyss, LBH emerged 5 years later to be a very powerful leader of the demon world with a harem of wives. He eventually took his revenge and cut SQQ into a human stick, ie, a body without limbs.

Shen Yuan was terrified knowing his eventual outcome in the novel. Of all people, he had transmigrated into the body of this doomed villain, SQQ. He planned to hug the golden thigh of the protagonist, Luo BingHe and treat him very well so that he won’t be cut into a human stick. He’s going to change the story! But the system refused to let him do so, minus points if Shen Yuan commits OOC (Out Of Character). Shen Yuan was expected to keep his cold and aloof demeanour of the original SQQ. And he’ll return to his original state if he has 0 points, which is death for him, since he’s actually already dead. So if he wants to live, then this XianXia cultivation world is his only chance to make things right!

The new SQQ (Shen Yuan’s soul), knowing LBH’s pitiful childhood, treated him as well as the system permitted and taught him martial arts and cultivating in the correct way. LBH’s closest and dearest adoptive mother had died. So SQQ became the next person who treated him the best. LBH was very grateful and fiercely loyal towards SQQ. With this change, somehow the real events started deviating from the original rotten novel! 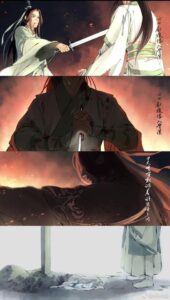 LBH grew up to become a very handsome young man. He was SQQ’s star disciple. Unfortunately, the scene in the original novel where SQQ threw LBH into the Endless Abyss where the darkening of LBH into the demon realm cannot be avoided. With a heavy heart, SQQ reluctantly pushed LBH into the abyss where he emerged 3 years later as leader of the Northern Territory of the Demon realm. During these 3 years, LBH was heart broken thinking that his beloved Shizun despised him for being part of the demon race. In the abyss, he cultivated and strengthened his demonic energy.

SQQ was surprised that LBH returned so soon and they both met again in quite an awkward situation. The novel also took a sad turn when SQQ sacrificed his spiritual energy and his mortal body while trying to save LBH when his demonic and spiritual energy were at odds. This is chapter 43 and I found myself crying shamelessly. 😭

LBH had his fair share of crying and begging with SQQ too. He craved to be with his beloved Shizun and always hoped that Shizun would follow him and be with him willingly. All that he wanted was just Shizun’s love, acknowledgement and trust. He didn’t want fame, wealth, women and anything else. But time and again, his Shizun misunderstood his intentions or did not yield to be intimate with him. And LBH felt that he was always being left behind, hurt like an unloved, abandoned child. After SQQ’s supposed death (Chapter 43), LBH looked after SQQ’s corpse by repairing the veins and infused his spiritual energy to prevent the body from decaying. He summoned SQQ’s soul and hugged the corpse for 5 years!!! 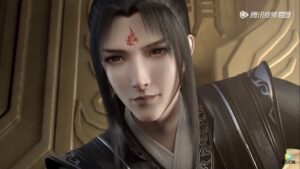 It was hard not to be touched by the extreme sacrifices that LBH made for his Shizun. Eventually in order to save LBH from turning disillusioned and mad, SQQ “gave” his all (and body) to appease his madness and insecurity.

I do believe Shen Yuan (soul inside SQQ) has fallen in love with LBH since a long time ago, just that he didn’t realise it. Otherwise why would he time and again tried to save LBH and sacrificed himself for him? He didn’t know of his true feelings towards LBH probably because he was originally a straight male and had to maintain his cold and dignified demeanour as a Shizun in the cultivation world, so he unknowingly put up a wall against LBH.

It is a happy ending, I must say! Otherwise I wouldn’t recommend this novel!!! 😂 I love 💕 happy endings! Hugs hugs and hugs!!!

Do read the extra chapters 82-84 too if you can’t get enough of the BL sweetness. Chapter 83 where the original world LBH face-off with the our SQQ’s LBH. 😂  and our SQQ nearly lost his chastity to the original LBH!

Animation by Tencent is available now.《穿书自救指南》 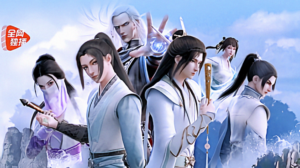 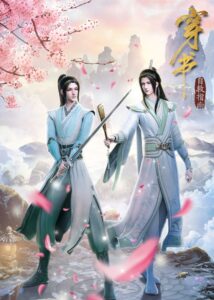 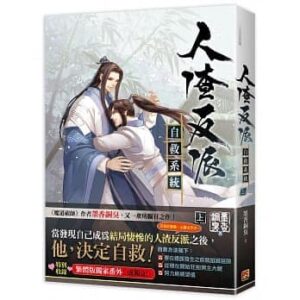 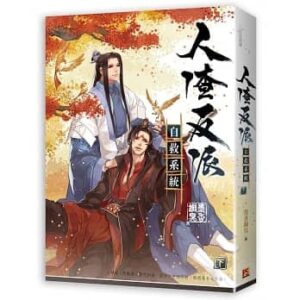 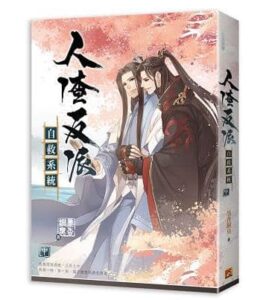